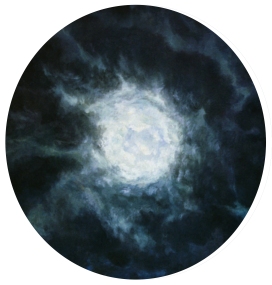 part one – an introduction

“You get used to being alone. In fact it seems I’ve been that way for the best part of my life. That is the life that I think I live inside this round space, one that I now call home. Hundreds of years of watching humanity watching me. I’m usually locked away, but once in a while they take me outside just to remind themselves of an alternate value of life. Out of that dark cupboard to shine in the light and allow my surface to reflect the substance of what I am now. Pigments mixed with oil & brushed onto this flat surface with magical and mysterious belief, it’s what holds me together. They value me as an object of the past. As a reflection of how they used to be. An artefact of an existence that humanity occupied in myth and legend. They don’t know that I am actually quite alive, and in every sense of the word. Most of them never understood me or the message I tried to give them, and they still don’t. They walk around thinking they are the total perfection of the evolution of a creature that lives on this tiny piece of blue rock in an infinite space, a space that they can’t even conceive of or begin to understand as a pure continuence. They are still ever so self congratulatory on their superiority, that is to everything else in the universe. And they can only think in beginings and ends, and an the ends to a means.

By the 22nd century humanity moved on from seriously looking at anything else other than themselves. Myths and legends like me are an oddity, something to see every now and then. I once existed as a human being, much like you. I know the frailty of vanity and the over valuation of self. It is the ego that is mankind’s greatest friend and devoted enemy. A singularity that holds mankind back from unifying with the cosmos in life, destined to discover the beautiful reality of the cosmos, but only in death. It’s a confusion of reality that has gone on for millennium.

The serious downward spiral started when philosophical thinkers went to the edge in the search of an absolute truth, but they dropped into the abyss of their own intellectual dogma. All of them in a search to find the very beginning of time itself. When the answer lay staring them full in the face. They probed and picked at the universe with their technology until they forgot what they were looking for.

The mission that I had accepted, way back when, was simple. To allow humanity a glimpse of their own truth from this round space. One that I have now occupied for centuries. Maybe, one day truth will once again find favour with humanity. Until then I am redundant and so I amuse myself by reliving how it was I ended up here. Over and over to myself – until it seems as if it was only yesterday. Although it was hundreds years ago or so when I first began to change who I was, or rather have the change forced upon me, from what I was.”

writing and images are copright of Denis Taylor -©DenisTaylor2006-2020 all rights reserved no reproduction is allowed with the express premission of the creator – ©creators global rights all inclusive2019.