…By now I began to feel a little uneasy about the whole process and wished I had escaped earlier. “Pull back your foreskin for me” He said. I obliged. “Oooo, what’s that” he cooed, pointing to the red patch just under the top of my bell end. “Don’t know? That’s why I’m here!” I answered him with naïve honesty. He continued with the swabbing, gently pushing the plastic stick topped with a cotton bud into my piss hole. He then handed me a glass of water. Beads of sweat were by now running down my forehead and also down the middle of my back. “Now go behind that screen, take this plastic cup with you please, you may feel it sting a little bit as you pass water.” Stuart warned me with a smile. “Just going to have a word with the Doctor, back in a mo..”

I stood up and went behind the screen that concealed a urinal. I put my dick into the plastic cup, sort of hovering over the urinal and waited. I whistled to help encourage the act. I looked around for close circuit cameras, convinced this was all a wind up. I felt ridiculous stood there wearing a business jacket, a shirt and a tie with no trousers or underpants. It all seemed very silly.  Stuart came back with Dr Copland. I offered the cup of piss, which  Stuart took and placed n a shelf. Dr Copland asked me to lie down  whilst she took a look at me . I don’t know what Stuart had said the her whilst I was peeing into my cup, but she seemed curious, if not actually a wee bit concerned.

“Stuart, go and see if you can get Doctor Gupta on her mobile, right away please.” He hurried away. “I would like a colleague of mine to have a quick look at this, hopefully she will be still in the town, which will save you coming back. Is that ok with you?” She asked, my brain said. ‘Fuck that, I want out of here’ but my mouth said. “Ok, no problem.” Dr Copland covered me with a clean paper sheet and asked if I could ‘hang on’ until they could organize it. I thought, hang on to what, organise who? But again, I said Ok. I lay there wondering what was so bloody interesting about my knob end and began to run my sexual history through my memory banks trying to find an indicator of any known diseased individuals that I may have contracted something nasty from. What if its one of those sexual diseases with a long name, the ones I had read about in the corridor? What if it was Aids? I decided ignorance was the best protection against worry and employed it by staring into space and entering my special ‘nothing box’ I kept in my head for emergencies. Stuart came back to the examination room and casually walked up to the examination bed where I lay totally oblivious to what was going on.

“Are you ok?” He asked. “I don’t know what time is it.” I replied as a way of avoiding an answer. I was anxious about how much longer I would be kept waiting and what was this attention about anyway? Why couldn’t I just have the penicillin jab and leave? Stuart piped up. “It’s coming up to one forty five but don’t worry about that Doctor Gupta is on her way, she will be here in fifteen minutes”. He must have sensed my need to leave the place. “I love art, not that modern stuff.” He said. I looked at him confused. “You know, you asked me before, about art!” Stuart tried to engage me in conversation. “Oh yea, which painter did you say you liked?” I asked him. He looked at me and thought for a second. “The romantic type, you know, those who paint beautiful sunsets, spiritual ones. It may be old fashioned to professionals like you, but I can loose myself in paintings like that.” He looked for a reaction. I made some glib remark along the ‘whatever turns you on is good art.’ a typical cop out response from a seasoned artist. What I was really interested in was to get out from the clinic and sink several pints of beer to alleviate the feelings of increasing dread with a huge dose of panic boiling up in my brain. He chatted on, skipping from subject to subject including music and drama and how the summer in Portsdown was great and full of interesting people. I listened but his words just bounced off me. “I think I can hear her coming up the stairs now.” Stuart said and he ran to the door.

Doctor Gupta walked in with a purpose in her stride. She introduced herself and asked if she may look at my dick. Bet she says that to all her customers, I thought while at the same time nodding my approval and she pulled back the sheet. She was very gentle, but said little. She looked extremely close at my knob end and at the same time exchanged words with Doctor Copland. Saying things like, ‘Noe-plastic skin abstractions’ and other medical terms which meant bugger all to me. “I’d like to take a little sample, if that’s ok.” She asked. Once again my brain screamed out, “Fuck off” but my mouth, said “Ok.” Stuart then asked me to lie back whilst Doctor Gupta prepared to cut a piece of living flesh from my penis. Stuart positioned himself between me what was about to occur. He held my trembling hand gently as she sliced what she wanted. Much to my relief I felt nothing and the whole operation took only seconds. “I will just examine this whilst Stuart dresses you.” She said. ‘Good’ that’s means I can go, I thought. But dressing in this case meant surgical dressing. He wrapped a bandage of some sort around my knob and secured it with tape.

“Ok, now put this pad between you and your underpants and pull your trousers on. Doctor Gupta may want to talk to you.” He said efficiently. I was more concerned about how much blood there was on the bandage and how long would it take to heal up. And I also wondered how much bloody longer I would have to wait to get out from this torture chamber. I put on my clothes and then sat on the end of the table, waiting. Before long Doctor Gupta came in the examination room and asked if we could have a little ‘chat’ in the office. ”Of course” I said. By now I’d agree to anything as long as it speeded up my exit. We sat down and she began by asking me if I had a car? And if could I leave my employment – at short notice?” – Totally confused as to where these questions were heading, I quickly replied,  “Sure, no problem , I’m my own boss.” 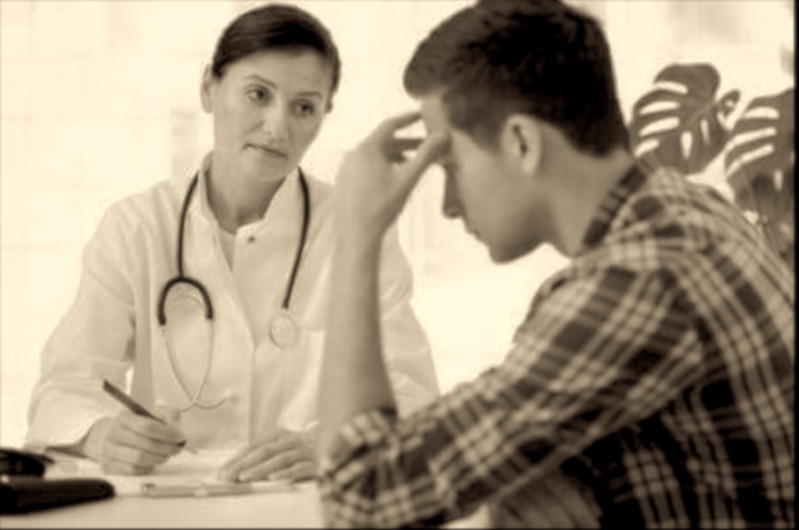 “Good” she said. “Well I have to tell you that we are almost sure that you have a malignant cancerous tumor.” I looked at her in disbelief. “Not aids then?” – For one flirting second I felt relieved until I had absorbed the full meaning of the words tumor and cancer. “No, not Aids” She paused and then repeated that dreaded word. “Cancer”. Silence prevailed for a second or two before she followed up the word, possibly Malignant.

“Now it may well mean you will need an operation and probably pretty quick.” She emphasized the word ‘quick’ then continued solemnly. “I know of a surgeon who specializes in male cancers, in fact I attended a seminar he held, only three weeks ago in London.” She said with a sort of pride that perplexed me. “I’ll phone him now and ask if he can see you urgently.” I looked at her and the word malignant stayed in my head and very little else. “Malignant” I repeated the word out loud and looked at her again with a huge question mark over my head. “He’s very good, had lots of success, the leader in his field, in fact you could say he is one in a million.” Dr Gupta said perhaps help reduce the look of terror written all over my face. By now my mind had gone numb. I kept repeating the words ‘malignant cancer’ in my mind. That means ‘serious’ I said to myself again and again, not really wanting to admit the gravity of the words I had been given by the Doctor, and yet needing to come to terms with them non-theless.

I think she picked up the phone and spoke to someone? But I’d gone into a daze. I could see her mouth moving but could hear nothing until she said with excited pride “Excellent, so that’s ten thirty Monday morning, thank you”. Doctor Gupta turned to face me. “Ok, now I have managed to get you to be examined by Mister Dragonwitz on Monday at ten thirty. Stuart will give you details of our report and how to get to his clinic at the hospital”. She paused and looked at my blank emotionless face. “Its likely you will be admitted right away, so I would advise you to take a change of clothing and so on.” She said trying to bring me back onto planet Earth. Although I was functioning on the outside and nodding in acknowledgement of the logical advise,  but in truth I had gone into a total melt down.

Stuart dutifully prepared the notes I needed. Doctor Gupta and Doctor Copland wished me good luck. I shook their hands and walked down the stairs. ‘Luck?’ I need luck? I thought. Stuart walked with me assuring me that “Everything would work out fine” He was, “sure of it”. He unlocked the door and I stepped out into the sunshine. Fumbling nervously in my pocket I extracted my telephone and cigarettes, from my rain pocket, lit a cigarette and and rang my wife at home in Sweden.

“Hello sweet heart” She said in her wonderful Anglo Swedish dialect. “I’ve got cancer,” I said in a matter of sort way. The phone went into an deadly silence. “C a n c e r” I repeated it slowly. “Did you hear me?” I continued to talk in a matter of fact sort of way to try and prevent her from distress. “I’ve got to go and a see some bloke who specializes in dicks like mine on Monday, so I’ll be able to tell you more then, but I’ll sort it, no worries.” I lied, what could I do? I couldn’t tell her what could be the worst case scenario, death.

“I love you” she said as I clicked the phone off. I lit another cigarette and began a slow walk back into the town, my life had just been put under threat of non existence, everything was on hold, and there nothing I could do, nothing at all. Monday could be confirmation of the beginning of the end of me.