an essay about the art of the editor of

When I first suggested a feature article on Denis Taylor as an artist and a man, the intention was to create a rather light, but hopefully quite insightful, look at the artistic pedigree and life experience of the editor of “Painters Tubes”. Part one followed this plan with little deviation from its original blueprint. However, before I even attempted part two, a link to a folder of files (both images and word documents) arrived from Denis, marked “A second chance”. When I finally found the time to download and inspect the files I knew at a glance I would no longer be able to write the follow up article in the style I had planned.

The folder comprised a series of abstract paintings and several accompanying poems that seemed to have one clear theme. That theme was in fact Denis’ battle with a cancer so aggressive that it had been considered terminal by his doctors. I am by nature outspoken and have undoubtedly been guilty of many an insensitivity before now but I was left in no doubt that such an expression of extreme physical and mental suffering combined with the emotional implications of having to consider one’s own mortality so closely would require a more serious approach than my first article on Denis.

Many of the abstract paintings that now appeared on my laptop could actually be seen semi-representational self-portraits, they were simply from such an extremely macro perspective that they quite literally worked on a cellular level. The intense lines and bold colour pallet (chiefly vivid reds) of Denis’ “Cellular Abstraction” series presents you with a clear paradox because it is at once a series of abstracts that nevertheless provides an unblinking insight into Denis’ literal truth during this time. That truth being the uncontrolled division of abnormal and malignant cells within his body. The intricately woven double-helix that appears in the first of this series is not just a reminder of the artist’s remarkable dexterity with a brush, but also of the fact that the fundamental building blocks of his body were now killing him. 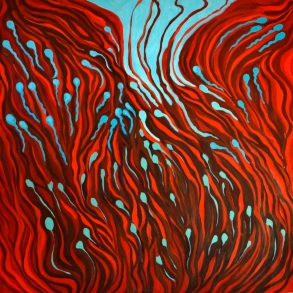 Other pieces were possibly even more personal. One of a male nude, which I took for a self-portrait, is done in mournful blues and black and felt painfully honest. The figure’s body language spoke not so much in general of pain in terms of the human condition, but instead dealt with personal suffering and its inevitable isolating effects.

Another of Denis’ abstract paintings clearly depicted sperm. I confess I lacked the courage to ask Denis directly whether this perhaps was a discourse on the effects of the invasive treatment or the location of the penile cancer he had battled and ultimately defeated. These pieces, like so much of Denis’ work, felt so very visceral and left me struck with how, for a painter who often works in the abstract, Denis creates very tangible works of art. His vibrant colour pallet and visceral representations may be signatures of his work but they do not tie him in to one style or another. There is realism in his abstract and there is no sense of hiding within a movement, we are simply left with Denis’ own unique truth.

If his painting were painfully honest throughout this collection, the poems he forwarded me, which were written during his illness and dealt with his cancer, were at times genuinely hard to read. “Portrait of a Tumour” presented me with so honest and physical a representation of the internal and external pain he must have been going through that I had to pause to take stock of my own thoughts half way through. And while “Portrait of a Tumour” dealt with such physical torment, “Depressive State” was no less traumatising in its exploration of the emotional suffering the disease caused Denis. Most importantly the poems worked together with the paintings broadening the insight into both Denis’ physical experience and emotional state during his cancer. The poems mirrored the paintings intrinsically personal nature and the directness of the language was deeply reminiscent of the boldness of Denis’ colour pallet. Having in my own work with the expressionist Shaun Smyth, composed poems as companion pieces for paintings I was fully aware of the challenge presented in writing “Cellular Abstraction”.

It may be because as a younger man I have undoubtedly had less life experience than Denis, or perhaps because I have been fortunate enough not to have had to stare death so directly in the face, but to my own shame I felt uncomfortable with the unflinching honesty of the art he had shared with me. The truth is we are all to different degrees embarrassed by the suffering of others and particularly by those whose illness is deemed to be terminal. We may not readily confess to this most unworthy of emotional responses and the best of us barely register it due to their limitless capacity for empathy and kindness. But inevitably it is why we find it hard to address those who have faced a terrible trauma or suffered a great loss and it is why we make small talk at funerals. I felt admiration for Denis’ ability to paint his pain, not as a metaphor for suffering and inevitable death, but for what is was, literally a cancer that had almost killed him and could not have failed but leave its marks upon him.

This series of paintings about Male Cancer are available for educational exhibitions and discussion surrounding Male Heath Awareness please use the contact form below to enquire about the terms and conditions of use.

below: written by David Traves from the Crossley Gallery Dean Clough Exhibition catalogue (2018-2019) which the artist showed his work.

Denis has a colour palette that is as bold as his subjects, his canvases are awash with startlingly colour.  His style as a painter eludes being characterised as one school or another and is instead distinctly original, rather than being influenced by the work of past masters or his peers. Denis allows his visual intelligence to inform his work. However, it is his mastery of the artists hand and his composition that allow him the freedom of authentic expression. With his unique 21st century approach to painting. he also celebrates the traditions and achievements of past artistic masters and supports contemporary artists aspiring to reach new heights of self-expression with a mentoring nature.

Denis has written about art and artists for high street gallery catalogues, the International Art Market Magazine and  painters Tubes magazine for a number of years. He conceived, wrote and produced videos for BBC North West about the future  development of Art [2006]. He has delivered openings talks and speeches for art events at museum and public institutions in both the UK and Sweden. Denis’s Studio is based in Sweden.